Getting married soon?Looking to hire tableware & decor?Let's help you find the right supplier.
Get Offers Today

Hind Katkhuda and Khaled Naim got engaged in Amman, Jordan on 28 December 2015. They had an amazing "fun fair wonderland" engagement party theme organised by Majeda Kassir Bisharat of My Event Design.

We asked the talented team of wedding designers and planners, My Event Design, to shed light on how they transformed a historic site, located on the outskirts of Amman, into this stunning magical wonderland. Here is the conversation:

The event was held in Baykeh, an old horse stable owned by a Jordanian family in Amman.

2.     What was the theme and inspiration behind the Engagement décor?

The theme was ‘Fun Fair Wonderland'. We wanted the guests to feel like they were stepping into an alternate world. Every element of the event depicted that of a magical wonderland, igniting each guests imagination and inner child, keeping in mind that element of romance and intimacy. The main color palatte was black, white and fuchsia.

The dessert buffet was customized especially for this event.... Different cake shapes and sizes, macaroons, and mini edible wedding cakes were displayed along with beautiful flower arrangements.

3.     What was the most special and unique detail at the Engagement?

Seeing as the space was historic one, a lot of challenges arose when planning this engagement party. For example, due to the sensitivity of the old stone, we were not allowed to use a single screw in any of the original infrastructure. Therefor, we had to build certain structures so we could add the touches of the fun fair theme. However, the cross-vault ceiling with its traditional stonewalls truly added a distinct authenticity to the entire event.

To create a fun fair wonderland atmosphere, we installed a pathway that was lined with mirrors on each side. One side was covered with fairy lights installation, and the other side included a set of 2D fun fair silhouettes such as hot air balloons, carousel, ferris wheel, magician and many more that were displayed on the mirror partitions which portrayed a 3D feel. Black and white square shape patterns were installed on the floor to add to the overall feel of the entrance. The second part of the hallway was comprised of the dessert buffet display. The dessert buffet was customized especially for this event, the colors chosen were rustic white with gold, black, and finally fuchsia. Different cake shapes and sizes, macaroons, and mini edible wedding cakes were displayed along with beautiful flower arrangements. 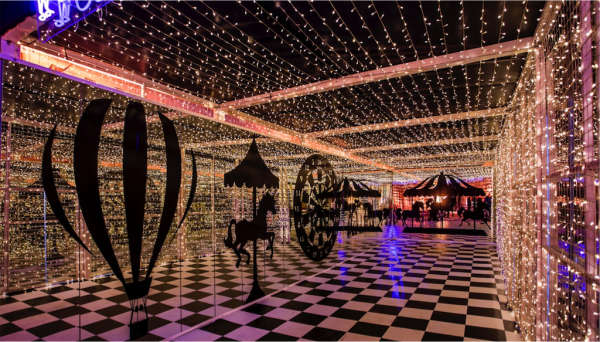 One side was covered with fairy lights installation, and the other side included a set of 2D fun fair silhouettes such as hot air balloons, carousel, ferris wheel, magician.

Once guests entered the beautiful ballroom, they were greeted by an array of pieces that contribute to the wonderland world. They automatically got a feel of the whole space, which included suspended hot air balloons covered with fairy lights, that added to the warm color of the stone. As guests looked around, they saw spurts of marquee lights customized by My Event Design. Next comes the overall warm textures and colors that included two floral arrangements; the first, a runner full of fuchsia Vanda; the candles perfectly placed the floral runners that contributed to the intimacy of the space.

The second consisted of five mirrored wheels that were filled with fuchsia Mokara, fuchsia Phalaenopisis, and pink Amaryllis – both the Mokara and Phalenopisis were displayed in an opposite manner, again to add the romantic feel of the space, high glass candle holders were added in an 'S' shape that beautifully complimented the mirrored wheels. Wild forest black trees also dressed in fuchsia moakara were placed between each stone arch. Each of which were filled with fuchsia cyclamen plants.

The mirrored tables of all sizes included under-plates that displayed a different fun fair item print as well as the couples' printed names. And finally to add to the romance, a bloom of Vanda cut flower were placed over the napkin. Last but not least, the focal point was the 20m dance floor, which was covered with various fun fair design silhouettes spread all over the floor. It was further accented with twinkles of light leading you down to the bar area as well. 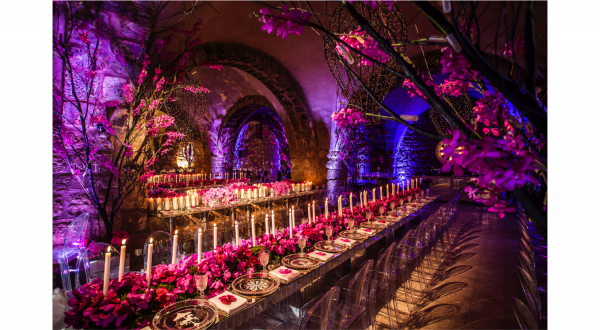 As always, this event would have been much more difficult to organize and execute had it not been for my amazing team at My Event Design. I would also like to thank all parties involved for making this event such a beautiful and memorable one for me, all the guests, and most importantly the beautiful couple!

Check out the video of the setup here.

Ideas for a Yellow Wedding Theme

Your Wedding in 'Very Peri' Pantone's Color for 2022

Consider These 6 Vital Things When Buying An Engagement Ring

How to Properly Take Care of Your Wedding Ring

A Guide to Choosing the Perfect Ring for an Engagement