At the young age of twenty-four, Peter Langner moved from Hannover, Germany, to Paris, to attend school at the world-renowned Ecole de la Chambre Syndicale, in order to follow his passion and become a great couturier. Shortly after entering the school, Peter’s arresting talent was so obvious that he was asked by the director to design the wedding gown of her daughter as well as her gown. Completing his studies with distinction, he went directly to work and learn from the masters at the famous design houses of Christian Dior, Emanuel Ungaro, Guy LaRoche, and Christian Lacroix. In 1991, after these many experiences and exposures to some of the most influential people of the world, it was time for Peter Langner to open his own laboratory and Atelier in Rome. Following the movement of fashion, he opened a showroom in Milan, and by 2015 he moved his headquarters and atelier to Milan as well.

Peter Langner founded his own brand in 1989 when he first opened his Atelier in Rome and then moved it to Milan in 2015, following the movement of fashion. The brand is one of the few bridal brands that looks forward to new horizons: it appears in more than 20 international countries and it is a protagonist in the American and Asian bridal fashion scene. 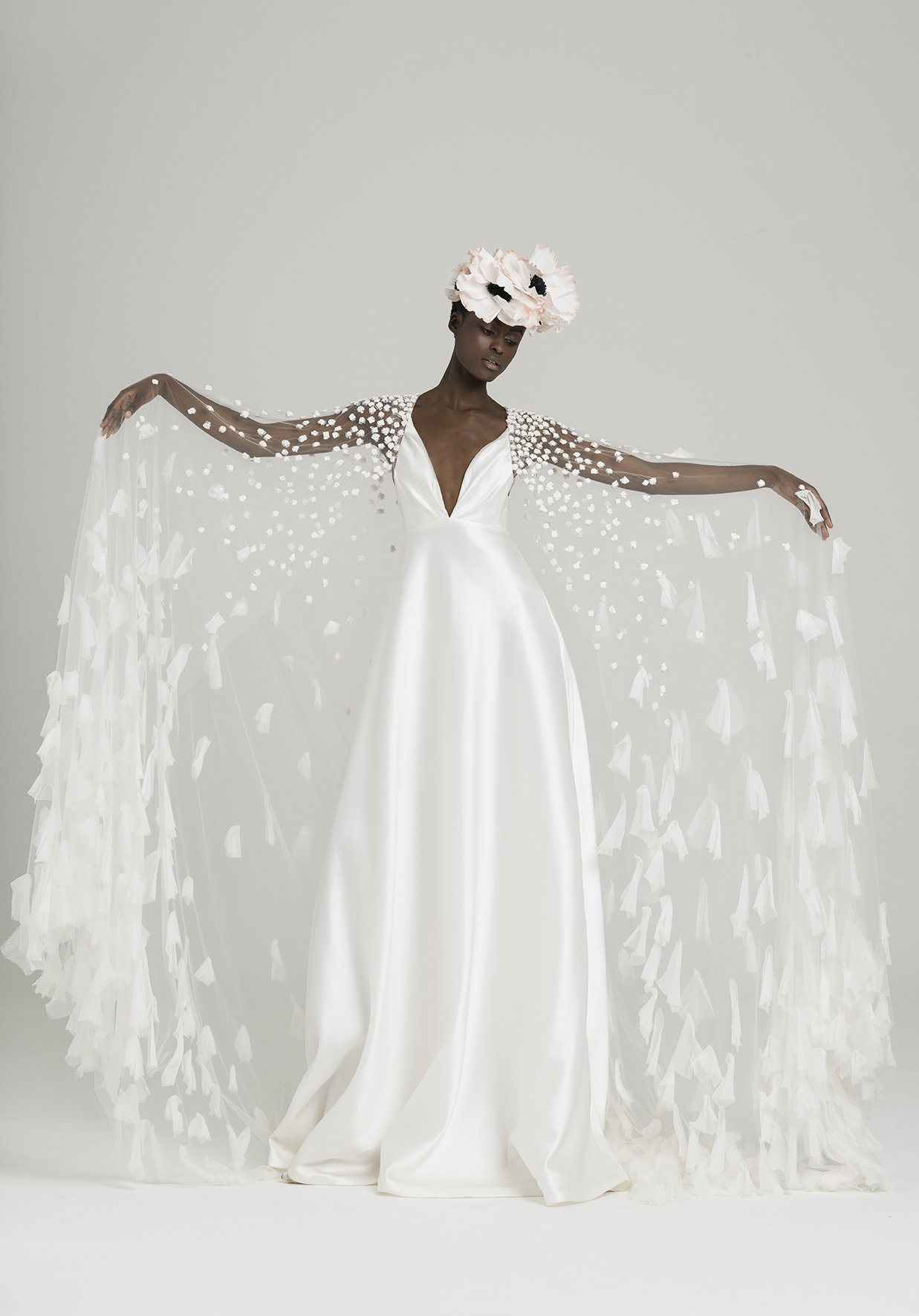 What Peter Langner had spread worldwide, in these 30 years of career, are the Italian excellence, the artisanal work, and a fashion that is timeless: all features that come from his strong cultural background. Architecture is one of his main sources of inspiration: what he does every day is giving life to every creation starting with the fabric on the mannequin since he began as a pattern maker. To reach his goal, he has assembled an amazing staff of artisans able to turn into reality Peter’s designs using their master skills. Teamwork and the passion behind it are the strength of the brand.

“One of my greatest fortunes was finding my amazing staff. They believed and saw where I wanted to go. They stood and still stand next to me beyond benefits and compensation. The passion we share is for sure the greatest help I could ever find.” Peter Langner.

The team is in constant search of something new, to go beyond conventional: they work always in close collaboration with their suppliers, searching for new exclusive materials, facing new forms of fabric processing, or even creating their own embroideries. In doing so, Peter Langner’s staff never relinquish the goal of perfection or abandon their commitment to the highest quality.

We had the chance to ask the talented Peter Langner some questions, and here is what he had to say:

Can you tell us about when and how your brand was established and how you started?

I started to follow my passion when I was twenty -four, moving from Germany to Paris to attend school at the world-renowned Ecole de la Chambre Syndicale. After my studies I worked at the famous design houses of Christian Dior, Emanuel Ungaro, Guy LaRoche, and Christian Lacroix, where I learned the most, working on the field and falling in love with the matter. I then decided to pursue my dream of opening my own brand, which happened in 1991, twenty-nine years ago. At first, I was based in Rome, where I lived, and opened my own laboratory and atelier. After twenty -four years I thought it was better to change air and follow the fashion movement, transferring everything to Milan, where I currently live and grow in this beautiful business.

What are the new bridal fashion trends that we will be seeing in 2021?

The truth is that we try to stay above these statements like trends. We like to see our designs ‘outside’ the lines and rules of fashion. We want to make timeless looks, which go beyond a season or trend.

We never start with a big idea. Each of our collections comes from textile research, new fabric processing, the study of new shapes directly on the mannequin dress form. The collection comes to life as we create it, step by step, each gown at a time. At this precise moment, I’m noticing that our clientele is dividing into two strands: brides that go for a big and regal wedding no matter what, choosing precious and regal ball gowns, and brides that prefer the small wedding with a few dear ones and a minimal and simple style.

There are also brides that want a second look for their wedding or brides that want to be different choosing to wear a non-white gown, and it is here that our couture evening collection comes in. I think the variety of styles and gowns, of fabrics and embroideries, of colors and silhouettes, is what makes our collections unique and special, and perfect for an uncertain moment like this.

What do you advise brides before choosing their wedding dresses?

Choosing your wedding dress is an intimate and emotional journey that needs a wealth of instinct, patience, and comparison. The most important thing is to go to your appointment with your mind open to listening to the experts. In our atelier, we always put the bride before everything. Her taste and feelings are perfectly respected and each piece of advice wants to be no more than a suggestion. What always wins, in the end, is your heart. Follow your heart and you won’t have second thoughts. The choice of your gown is a love matter, it’s a feeling, it’s pure emotion. Listen carefully but always choose with your heart, this is the advice I give to my brides.

From where do you get your inspiration for creating your bridal collections?

All different forms of art inspire me: painting, sculpture, architecture, music, movies, and nature are just a few of them, which are constantly in my mind. We try to work around them, with them, and use them.

Another thing that is a great inspiration for me is the fabric: we use many different fabrics in every collection. We do a lot of research and have different people creating our own so that they are exclusive to us. I have to say, the fabric is the first step of the creation of a Peter Langner gown: the more I get into a texture, print, or color that gives me a particular feeling, the more I create wonderful gowns.

Can you tell us more about your home line Peter Langner Casa?

During the lockdown I found myself with an opportunity in front of me, to extend my brand in some directions. Due to the difficult time for the wedding industry, but also seizing the opportunity, I decided to create a new line that apparently isn’t connected in any way to the Peter Langner bridal line.

I gave life to Peter Langner Casa, a truly unique gathering of new home items and textured linens that wants to give people Italian style for their homes. It comes from my love for this beautiful country and my home in the countryside where I spend time when I’m not creating in the atelier. This line is a natural outgrowth of my sensibility, sense of style, and passion for handmade items and precious natural materials. Take a look at www.peterlangnercasa.com

A Conversation With Christina Mitsis, President of Mitsis Hotels Group, on The DWP Congress & The Wedding Business