Rasha and Amer's Wedding at The Tuscan Countryside

Amer and Rasha, a lovely couple from Dubai, got married at Borgo Corsignano, in the Tuscan countryside on 3 June 2016. The wedding was planned by an Italian wedding planning company called The Tuscan Wedding.

When discussing their dream wedding with the planners, both Amer and Rasha picked Italy as the spot of their destination wedding. Italy was the backdrop to their special day that was filled with love, romance, and absolute perfection as the couple said “I do”.

Amer and Rasha got married in a small village in Tuscany called Borgo Corsignano, a small town that used to function on its own with all the necessary establishments such as stores, schools, and churches, but nowadays it has been restructured into a property for luxury events.

The groom is a television producer and the bride works in advertising; however, they both took time off from their careers to share a special trip to start their new life together. 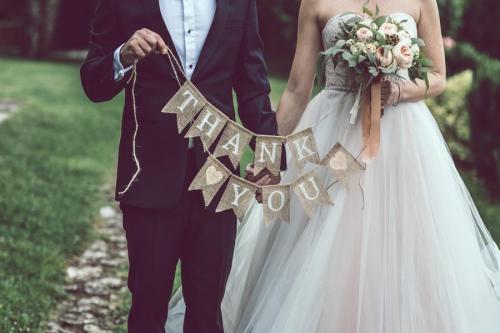 The first night in Italy was a very intimate and fun evening as the guests enjoyed a barbeque night and spent time reconnecting and bonding with each other.  They also sipped on delicious wine to calm their nerves and have a peaceful time.

This blissful wedding took place on a cloudy day at the beginning of June and the couple had planned for an outdoor wedding, where the flower designs were provided by Flowers Living.

The amazing light designs by Wedding Music and Lights added a magical touch to the location. The view was spectacular as they said their vows overlooking the hills and a castle.  As guests entered, they were offered a welcome drink and since it was outdoors, the ladies were given heel stoppers to avoid sinking into the ground. The bride and groom had really thought about their guests and were prepared to have an amazing wedding.

The bride looked absolutely stunning, her hair and makeup were done by the talented Lara Navarrini. 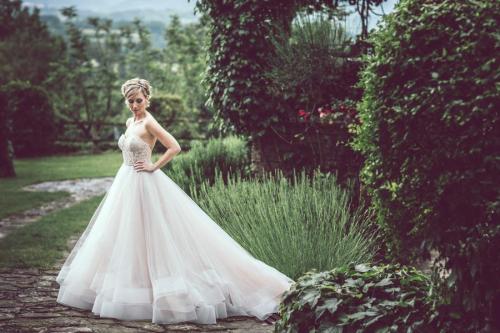 Once vows were exchanged and they were pronounced husband and wife, the party started with appetizers by the pool in an area that was overlooking the valley.  Dinner was also held outdoors catered by Galateo and guests were offered a light scarf or pashmina if they were feeling chilly.

The decor was unique and had rustic elements in it, the name tags were written on wine corks and there was a bottle centerpiece on each table. 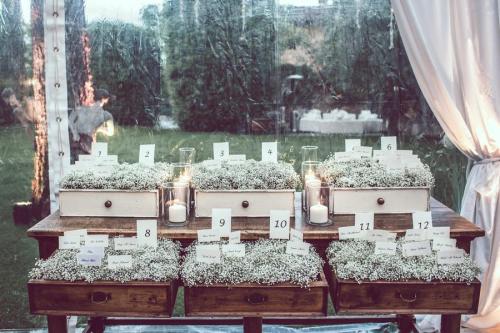 To thank their guests, Amer and Rasha gave them Limoncello bottles. They continued the celebration with cake and then dancing indoors to the music of a talented DJ whom they had hired from Dubai.

Once the night was over, the guests retreated to their rooms, but the next day the celebration continued with a pizza party where guests had pizza made right in front of them.

This was an experience that Amer and Rasha will never forget. They said their vows and entered a new chapter in their life surrounded by the natural and overwhelming beauty of Italy.  This country will forever hold a special place in their hearts.

A Fun Colorful Wedding in Lebanon

A Rustic Themed Wedding in Lebanon

A Purple Dream Wedding in Amman

How to Plan an Intimate Outdoor Wedding