The Wedding of Tania and Andrey in Florence

Tania and Andrey are a beautiful couple who decided to have a destination wedding, since the bride is from Jordan and the groom is from Switzerland with a Russian origin, the couple decided to celebrate their wedding in a romantic place abroad.

Tania and Andrey tied the knot on 25 June 2016 at a beautiful Villa, high in the hills of Tuscany and overlooking the city of Florence. Their Wedding Planner was The Tuscan Wedding.

The villa this couple selected to celebrate their marriage with family and friends has rich history with some famous flare. Built in 1400, the grand estate was home to one scene in James Ivory’s British Romance film “A Room With a View,” based on E.M. Forster’s 1908 novel. The villa’s grand yellow facade opens to sprawling gardens and an amazing vantage of the Tuscan hills and city below.

Engaged in the summer of 2015 and having made their marriage official in their current home, Switzerland, Tania and Andrey opted for their symbolic ceremony to be in Villa di Maiano’s olive grove under an arch full of pink and white flowers and greenery. They arrived at the wedding in a convoy of multi-coloured vintage fiats, perfect for this couple’s fun personalities and quirky tastes. 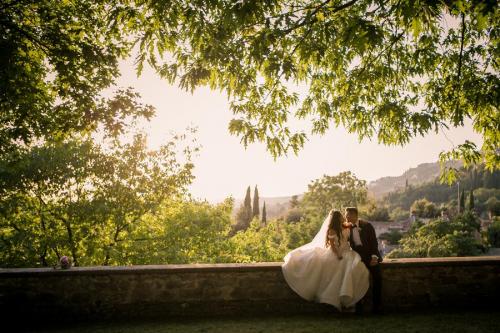 Tania’s dress was a beautiful off-the-shoulder A-line silhouette with a long train and adorned with colourful writing amidst the skirt’s layers. She looked like a fairy princess with a halo of pink roses decorating the base of her extensive veil. She wore colourful wedges embroidered with a rainbow of flowers.

Just before evening broke, the delightful group of wedding guests helped the couple pay homage to their personal roots. For Andrey’s Russian ancestry, during the aperitif, the couple participated in the bread and salt ceremony where a woman wearing traditional dress presented a round loaf of bread with salt in the middle, which is meant to symbolise the bride and groom’s commitment to one another. Then, to pay tribute to Tania’s Arabic ethnicity, the women wore traditional dresses adorned with bells and danced to live music.

The wedding celebrations and dinner were hosted in the garden in front of the villa with tables lined in rows and covered in rustic flowers and lemon trees. For the dinner, Tania and Andrey wanted a casual buffet for their guests with themed stations. The dinner selection included a beautiful fruit display, a mozzarella table, live-cooking pasta and barbeque stations, cold cut and bread spread, and pizza station.

The cake was a traditional Italian wedding cake, with layers of mille feuille and creme, and topped with fresh fruit and powdered sugar. The big day ended with a DJ and more dancing in Villa di Maiano’s main ballroom. 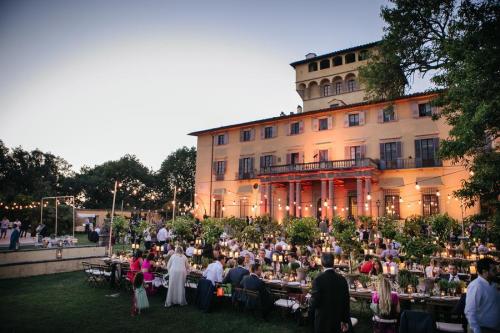