Top 6 Reasons to Have Your Destination Wedding in Portugal

From gorgeous beaches to historical monuments, Portugal offers countless venues for destination weddings and many reasons to convince you to celebrate your big day in this beautiful country. Portugal is a very safe country with a low crime rate located mostly on the Iberian Peninsula in southwestern Europe.

Portuguese is the official language, and it has a high proficiency level in English - higher than in other European countries like Italy, France or Spain.

Find out why you should definitely consider Portugal as a destination to celebrate your wedding:

In Portugal, you can find gorgeous landscapes to get married (or enjoy your honeymoon) in all regions. It is such a diverse and rich country, that the most difficult part is to choose only one place for a destination wedding.

“Choosing a place to get married in Portugal depends a lot on what couples are looking for – since it is one of the few countries in the world that can offer everything. It is a country where nature, sea, modernity, tradition, culture and gastronomy combine in perfect harmony. There are modern and cosmopolitan cities like Lisbon and Porto, which nevertheless maintains a huge load of culture and tradition. The idyllic nature scenery in Sintra with its forests and palaces also might be a good choice for destination weddings. The incredible monuments in Lisbon, Porto and Batalha are also on the list. We cannot forget the magnificent beaches of the Algarve or Cascais and the Rivers - the Tagus River is the greatest reference for weddings. For wine lovers, there are these fantastic vineyards of the Douro or Alentejo region. The Madeira Island is a mix between nature and modernity and it is known worldwide for the New Year’s Eve celebration”, explains the wedding planner Rui Mota Pinto.

Wedding planner Maria Connie Martins Vieira, from Ambiance Weddings Azores, suggests the Azores Islands for destination weddings in Portugal. “They are mystical, we have beautiful nature all around us. Lagoons of blue and green colors. It is special because we are surrounded by wonderful mountainous greenery, amazing sunsets, clear oceanic water. Cascades of spring water, nature at its purest state. This place is also known for its peace and tranquility, a sustainable heaven to our eco-system. If you want to experience a natural down to earth wedding, Azores is a must”, she says.

Another tip from Maria Connie Martins Vieira  of places to get married in Portugal are the Lakes of Sete Cidades and Furnas Lagoon. Also, they recommend the viewing points overlooking the ocean on the North coast of the island of São Miguel, also known as the Green Island because of its vegetation. 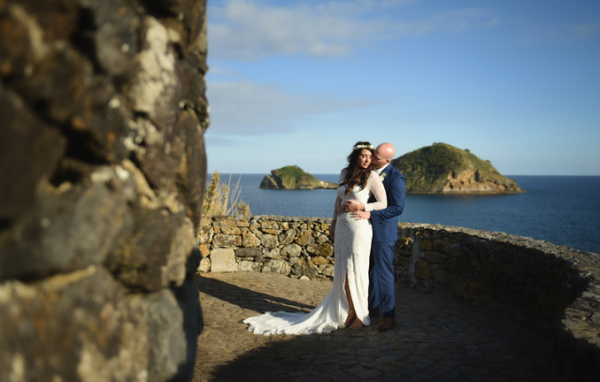 If you decided to get married in Portugal,  prepare yourself to put on some pounds on the scale. “Food is part of our culture, our traditions and our way of being and even thinking. There is no Portugal without our food”, says Rui Mota Pinto.

For Maria Connie Martins Vieira, seafood in Portugal is a must, especially if you are visiting the Azores Island: “We have fresh forkbeard fish to tuna with our typical spicy hot minced red peppers. Limpets grilled with garlic is a must for shellfish lovers, as well as, the king crab prepared with Azorean spices. Also, the Alcatra - a wine braised roasted meat done in a clay dish is a must. It is served on a sweetbread known as Massa Soavada. Nine islands, 9 different food dishes to taste”, she mentions.

Rui Mota Pinto also says that the cod is undoubtedly one of the greatest typical dishes in Portugal: “We have a unique way to cook the cod”, he says.

Portugal also has a strong tradition in wine production, “without a doubt, you cannot come to Portugal without tasting our wines. We have the reds of the region of Alentejo, Douro and Bairrada, the whites from these same regions but also from Lisbon, the Rosés and the special Vinho Verde, whose name is unique in the world such as Champagne in France”, suggests Rui Mota Pinto.

And, of course, once in Portugal, you must try its traditional desserts, known as “Doçaria Conventual”, which dates back to the 19th century. “It began in the monasteries and that’s why they are called Conventual Portuguese Confectionery. With the lack of food in the convents, they started raising chickens whose eggs were used for sweets. At first, honey was the sweetener par excellence. With the beginning of sugarcane plantation in the Island of Madeira, sugar became the great sweetener and the most used in convents. The eggs and sugar are the basis of all the sweets like Pastel de Nata, Fios de Ovos, Pudim Abade de Priscos, Encharcada, Pão de Rala, Arroz Doce, Leite Creme and many others”, explains Rui Mota Pinto.

Portugal is known for its mild weather during the year, the winter goes from December till March, with a maximum average daytime of about 16°C. The high season for weddings in Portugal is between May and October.

“There is little or almost no rain, very pleasant temperatures and the months of July to September are warmer. This is the time of the year when you can see all the splendor of the country and take advantage of a unique blue sky and an unforgettable sunset that has made people from all over the world fall in love with Portugal”, mentions Rui Mota Pinto.

However, if you are willing to get married in the Azores, Maria Connie Martins Vieira  says that the best time to do it is from April to September. ”We are different from Mainland Portugal where they experience higher temperatures. Here in the Azores, the highest temperature can reach 27ºC (80°F)”, she says.

According to Rui Mota Pinto, Portugal is indeed surprisingly beautiful and it offers great places to get married like palaces, castles and fortresses, as well as, stunning beaches, boats on the Tagus River, monuments, squares, churches and unforgettable cathedrals.

“It is a traditional but yet modern country, where time seems to have stopped in some places with overwhelming castles and forests, but at the same time seems to run in a fabulous, modern and rhythmic atmosphere in amazing cities”, he claims.

Portugal has a very strong culture, with more than 800 years of history. For Catholic couples, the country offers majestic churches to make unforgettable ceremonies, according to Rui Mota Pinto.

Also, Maria Connie Martins Vieira  mentions that the romantic Convents, dating back to the 1500 ́s, make a romantic place to host a destination wedding. “Culture is on every corner of Portugal, with FADO as one of the biggest references as World Human Heritage”, says Rui Mota Pinto.

Portugal has some amazing vendors for your wedding. Throughout all the editions of Belief Awards, an international contest for wedding planners promoted by Belief Wedding Planners, there has been several winners from Portugal.

Looking for a wedding planner in Portugal? Rui Mota Pinto and Maria Connie Martins Vieira might help you!

Below are some more photos of weddings organised by Rui Mota Pinto and Maria Connie Martins Vieira.

Your Dream Wedding in Jungfrau Region in Switzerland

DWP Congress is Set to Discover Bali as A Wedding Destination